Parenzana (Ferrovia Trieste-Parenzo-Canfanaro, TPC) is a narrow-gauge railway that connects Trieste with a series of stations with Poreč as the terminal station. Hence the name Parenzana or Porečanka. It was in operation from 1902 to 1935. It traveled through three countries: Italy (13 km), Slovenia (32 km) and Croatia (78 km). The railway corridor is preserved today, as well as a large number of supporting railway structures, bridges, viaducts and tunnels.

Although it operated only a little more than three decades, the small railway left an indelible mark on the entire area. Stone arches of viaducts still bridge the canyons of thunderous small rivers and dark tunnel entrances seem to be forever rooted into the steep wooded slopes. Along the line, typical landmarks and milestones remained scattered, marking the kilometres from Trieste and bearing an abbreviation of TPC (Trieste-Parenzo-Canfanaro), which reflects the aspirations of the builders to extend the route from Poreč to Kanfanar, where the railway could connect with the important rail line to Pula. People also continued to live with Parenzana, since the families of railway workers remained living in most station buildings, but eventually also other tenants moved in. The inhabitants used some parts of the route as cart tracks, while enterprising villagers found ideal conditions for mushroom cultivation in cold tunnels.

On the centenary of the opening of the line, an initiative arose to restore this unique railway, which was connecting people and nations in the beginning of the 20th century. In 2002, the County of Istria and its Administrative Department of Tourism, in cooperation with the Association for the Reconstruction of the Poreč-Koper-Trst Railway, laid the foundation for the future project “Parenzana – the Route of Health and Friendship”, with a view to arrange the entire railway route for the use of hikers and cyclists. Since then, the entire track has been arranged an marked by characteristic signposts, secured by guard rails on bridges and viaducts, the tunnels have been lit and auxiliary facilities set up that tell the story of Parenzana to visitors.

Part of the route of the old railway line, from the border of Italy-Slovenia till Poreč, has been transformed into bicycle and pedestrian paths, it has being considered to restore some sections of the railway for tourist purposes.

Today, Parenzana is the most famous and visited cycling and walking trail in Istria. The Croatian part of the trail is  maintained by the County of Istria and the towns and municipalities along Parenzana. The County of Istria continually arranges, equips and promotes the Croatian part of the Parenzana. Along the route, there are 20 Bike & Bed facilities, 7 specialized bicycle repair shops and 15 bicycle rental agencies (some of which also offer transportation services). Due to the increase in infrastructure works and the construction of the Istrian Ypsilon (highway) in the last ten years, Parenzana is intersected by roads in several locations. Therefore, although marked with traffic signs, caution is needed in these locations.

In the memory of the narrow-gauge railway, Vižinada organizes each year on the last Sunday in September a Recreational bike Marathon for all ages. The Parenzana Recreational bike Marathon is an opportunity for Vižinada to demonstrate to all competitors and its guests, how the path of the former railway line is a place where you can experience idyllic local views and see the best what Istria has to offer. The marathon is 46.7 km long and at the end of the cycling season this is the highlight of the recreational cycling season in Istria and Croatia. All competitors drive on an asphalt route, while the section from Ponte Porton to Vižinada is competitive. Besides the bike marathon, there is also a 10 km organized walking tour for hikers, along with visits to local wineries and olive growers, where refreshments are waiting.

You can find more informations about Parenzana on the website www.parenzana.net 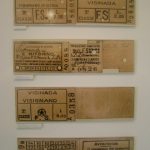 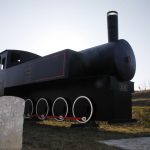 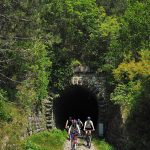 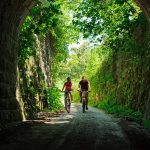 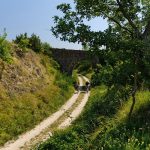 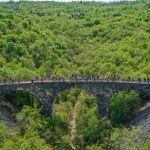