Due to its pristine nature and diverse landscape, Vižinada is the perfect place for all nature fans. Enjoy the beauty, the peace and the silence that nourishes the soul in all seasons. Walk, run and have an active holiday.

The tour starts at the southern entrance to Vižinada, next to the ancient church of Saint John the Baptist from the 13th century, from where we head south and cross the Carlotta Grisi street, named after the celebrated ballet dancer who was born in Vižinada, for which the title role of the famous romantic ballet Giselle has been written. The celebrated ballerina impressed in the mid-19th century with her performances audiences across Europe. We head some 100 metres south towards the outskirts of the town. There we turn to a path on the right (west), where we after 50 metres head south through a meadow and rare forest, that soon crosses the former narrow-gauge railroad track Parenzana. We are staying on our path that mildly turns southwest. Driving through fertile fields, vineyards and olive groves, after a gentle climb, we reach the road towards the villages Crklada and Grubići, from which you have a fantastic view over the rolling hills, cultivated with grapevines and young olive trees. We are passing close to the road and after a dozen metres south of the houses in Grubići we turn almost 180° towards the northeast, back to Vižinada. After a gentle climb and downhill through the vineyards, out path continues to ascend through plants and a rare forest all the way to the Saint Vital cemetery (3.7 km) and the small church of the same name from the 12th century. From the highest point of today’s tour (353 metres above sea level) you will have a wonderful view over the hills on both sides of the river Mirna, which were at the beginning of the 20th century linked by the Parenzana railway. On this side of the river you will easily recognize Vižinada and incomparable Motovun, and on the other side you will see Grožnjan, Završje, Kostanjica and Oprtalj, as well as Livade in the valley of the river Mirna.

From the small church we continue on the same route some 300 metres and then, exactly at the 4th kilometre of the route, we take a sharp left (direction south-southwest). We descend via the ridge path through the forest around one kilometre, all the way to the Parenzana trail (5.1 km). On the Parenzana trail we turn left, back to Vižinada and after some 400 metres we will arrive at the deep gorge of the Sabadin creek, that is crossed by the impressive bridge Veli most, i.e. viaduct Sabadin or Saint Vital (length: 64 m; height: 20 m). Here you have a wonderful view to the other side of the river Mirna valley. We follow the slightly ascending trail towards the high plain and towards the state road Vižinada – Pula (7.8 km). We cross the road and stay on the Parenzana trail, while exactly at the 8th kilometre we arrive at the life-size model of the U20 locomotive that once used to drive on the Parenzana. Using the stairs on the back you can climb into the space where the engine driver used to stand and imagine how these small and versatile railway locomotives mastered the share and winding railroad tracks from Buje to Poreč. Here we leave the trail heading to Poreč and return on the main road heading east back to Vižinada. We are passing the building of the former train station that is today a private house, recognizable by properly carved stone blocks from which it was built, with five or seven characteristic stone “teeth” above the windows and doors.

The route starts from the main square in Vižinada next to the baroque cistern, behind which there is the old city warehouse or fontik that was several times expanded in different stylistic nuances. Thus, two Venetian lion heads found their place on the façade. The lower lion is situated on the so-called “tariff” stone (delle tariffe), on which during the Venetian rule taxes were chiselled in, that had to be paid for the loading and unloading of goods at the port of Baštija on the river Mirna. This is also the place where we are heading today. We start next to the main parish church dedicated to Saint Jerome, the first translator of the Bible into Latin, who, according to legend, came from Istria. From the small plateau on the back of the church you have a fantastic view over the river Mirna valley, where we are heading to. We are descending through cultivated vineyards and olive groves that alternate with fields and forests. After that we are descending to the famous Motovun forest – with its wood the brilliant city of Venice was built – and we make a wide turn through the forest that brings us after almost 3.5 kilometres to the basin of the river Mirna, a former very important connection, on which the valuable wood from the Motovun forest has been transported to the sea, and upstream goods for the needs of the villagers from the interior of Istra. During Roman times the river Mirna boats could probably go all the way to Buzet, but since the basin of the river was not cleaned and maintained, the riverbed rose and the basin considerably shrunk, so boats could use only a smaller section of the river. In the 20th century the stream of the river Mirna was regulated, so that the once meandering riverbed is now almost completely straight and the once wild river has been tamed completely. Only after heavy rains the river basin is filled with water and the Mirna floods the fertile valley, showing its real face. We follow the gentle stream of the river on the southern side of the basin to Ponte Porton (8 km), which is from ancient times an important traffic junction, with roads heading in direction Vižinada, Buje, Grožnjan, Buzet, Kostajnica, Završje, Livade and Pietrapelosa castle. And even today this is a significant traffic intersection. At the former old bridge Ponte Porton there was a gamekeeper’s house and on the other side a guesthouse with accommodation. For centuries there also was the small port Baštija that was of great importance for the whole area, because, besides the transport of wood, it allowed the locals to trade their local products and connect with the world. In the Middle Ages, the river Mirna was navigable until here, from where flat bottom ships and boats, fully loaded with wood, using their sails and the eastern wind, sailed towards the sea, and returning upstream carried by the mistral wind, carrying different goods. On one side of the river, where capes create lee, the strong seamen from Kostajnica pushed and pulled the ships by means of forcada (forked poles) and alzana (tow ropes).

Our route crosses here the main road and we head back to Vižinada, leaving the river Mirna behind us and ascending on a forest path that on the 9th kilometre touches the serpentine of the main road and continues uphill through the forest in direction southwest. Somewhat before the 11th kilometre we leave the forest and come to a clearing, i.e. fertile fields and vineyards. The route is still ascending through the fertile land, now in direction southeast towards the village of Vranje Selo (12 km) and after that several hundred metres on the main road direction north to the village of Bajkini. Here we arrive at the 13th kilometre to the highest point of our route (277 m). This is a very wine-growing district and here high-quality olive oil is produced, so that you can get refreshments at some local winemaker or olive grower. We continue for a couple of more kilometres and arrive at the main road Vižinada – Poreč, where we turn left (direction east) and return to Vižinada. We return to the starting point of today’s route, to the street bearing the name of Carlotta Grisi, the celebrated ballerina born in Vižinada, for which the title role of the famous romantic ballet Giselle has been written. We hope that you will also return from today’s walk light-footed like the famous ballerina.

The trail starts from the central town square in Vižinada near the large parish church dedicated to St. Jerome. The small plateau at the back of the church, offers a magnificent view of the Mirna valley that we are headed to. We descend through landscaped vineyards and olive groves that alternate with fields and forests. Following the signs we enter the forest admiring the colors of the Istrian flora. We turn to the left and climb to the hill of St. Thomas (299m), from which the horizons of hills, hamlets, churches, valleys of the Mirna River are offered, you can admire the blue sea towards the west side of the hill. Following the signs, we descend to the old square, enjoying the narrow streets of Vižinada on wich a long time ago walked our ballerina Carlotta.

The trail that will allow you to get to know the local hamlets, the rural tradition and the beautiful nature is located in Vižinada, the trail number  504 called “Heart of Vižinada” is a 6.9 km long trail and covers the southwestern part of the municipality of Vižinada and passes through the villages: Bajkini, Vranje selo and Crklada. On this trail you can enjoy valuable cultural monuments (frescoes in the church of St. Mary in Gods’ Field, frescoes in the church of St. Barnabas in Vižinada), you can find out the history of Vižinada, on the path you can visit local winemakers and olive growers and taste their products, you can talk to the local people and find out the old  legends of Vižinada, as well as enjoy beautiful views, and on your return you can turn a hiking trip into a gastronomic event by visiting nearby households, restaurants and taverns.

More information about running and hiking trails can be found here. 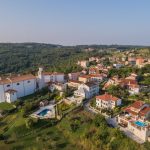 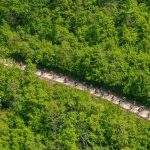 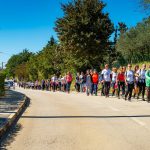 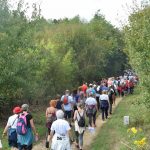